The Flame of Peace at MTW 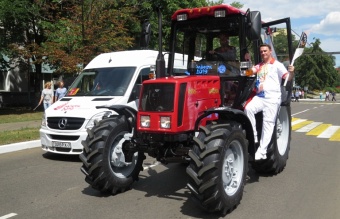 All week long, they welcomed the flame of peace on the streets and squares, industrial enterprises and in the organizations of Minsk. June 19, the torch relay was taken up at Minsk Tractor Works.

Behind are more than seven thousand kilometers of a way, fifty five settlements in the territory of eight countries, forty six days of travel across Europe and now the wait is over. Last Monday, the fire of the II European Games reached the venue of the main event of this summer – the Belarusian capital. All week long, they were welcoming the flame of peace on the streets and squares, industrial enterprises and in the organizations of Minsk. June 19, the torch relay was taken up at Minsk Tractor Works.

Minsk residents and guests of the capital, employees of the enterprise, schoolchildren and children from preschool institutions, representatives of the district and factory administration began to gather at the site near MTW museum long before the official ceremony began. The youngest spectators were presented with balloons and flags with the symbols of the plant and the upcoming Games, with which they then welcomed the participants of the relay. And although the hot sun, under which it was necessary to stand in anticipation of the action, exhausted many, the resulting beautiful holiday pleased everyone!

A bright dance and sports routine with elements of rhythmic gymnastics and acrobatics was specially prepared for this day by the participants of “Serpentine” variety dance ensemble and “Gracia” studio of Minsk Tractor Palace of Culture. Merry fox Lesik, the symbol of the II European Games, danced alongside with everyone, entertained guests, decorating dozens of photos, giving a lot of pleasant emotions to adults and children. 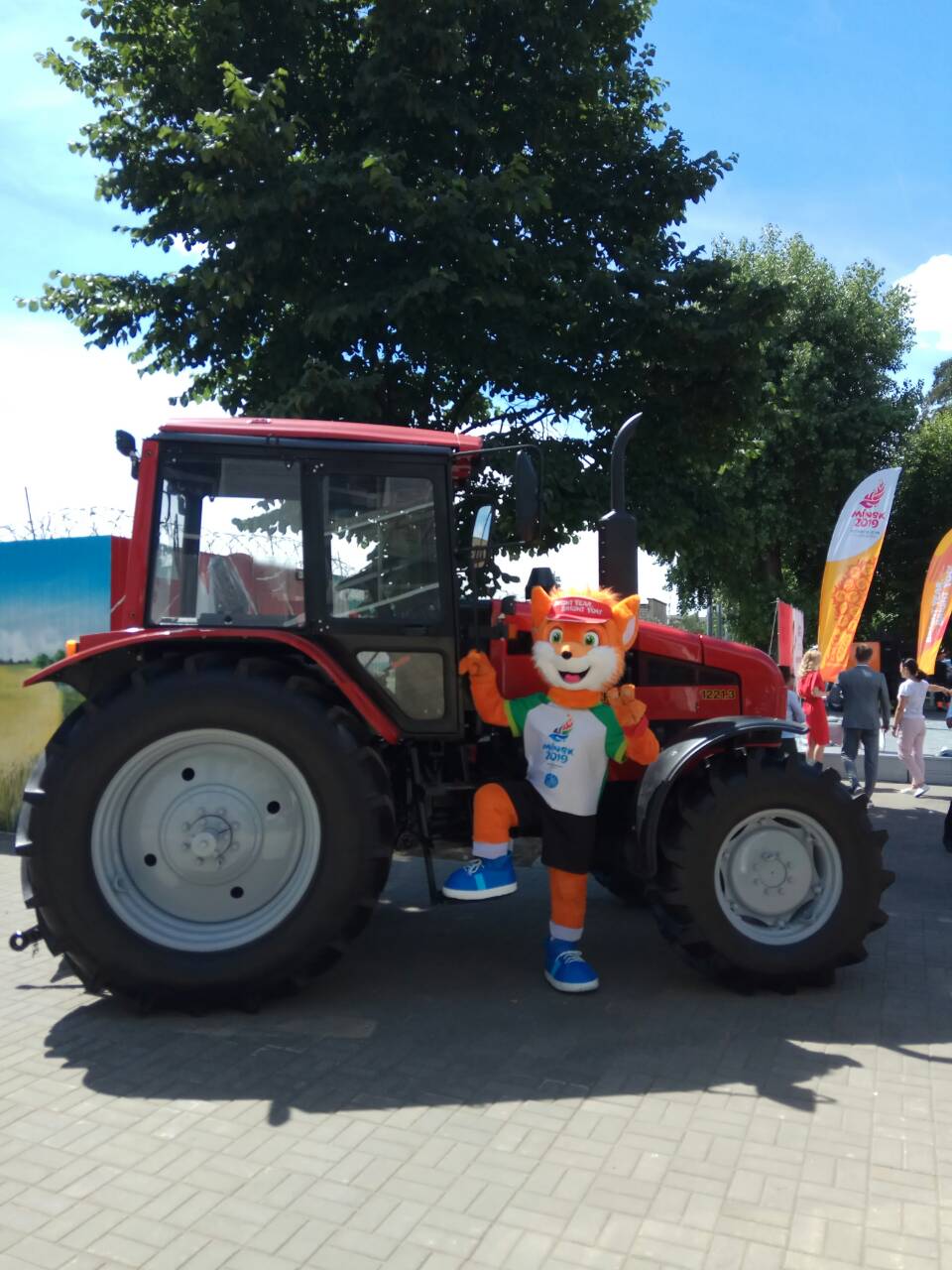 Opening the ceremony of welcoming the flame of peace, the head of the administration of Partizansky district Valery Voronitsky emphasized that the II European Games is a significant event for the whole country. This is a celebration of all those who love sports and pursue an active lifestyle. And this holiday came to our district. And the Deputy General Director of OJSC “MTW” for Ideological Activity, Personnel and Social Development, Andrei Suslenkov, reminded us how many good athletes we have at our plant and how often they delight us with success not only at year-round sports and athletic contest, but also at district, city and republican championships. It is them – the athletes who have shown outstanding results – who shall meet the honorary relay of the European Games on behalf of the factory workers. To a stormy applause of those who gathered, a motorcade of fire keepers drove out to the museum. The right to light a torch from the lampad in the hands of the keeper was granted to the electrician of the fifth mechanical workshop Leonid Yushkevich. Leonid Aleksandrovich has worked at the plant since 1986, has actively participated in sports events, was awarded the medal "For Labor Merit". 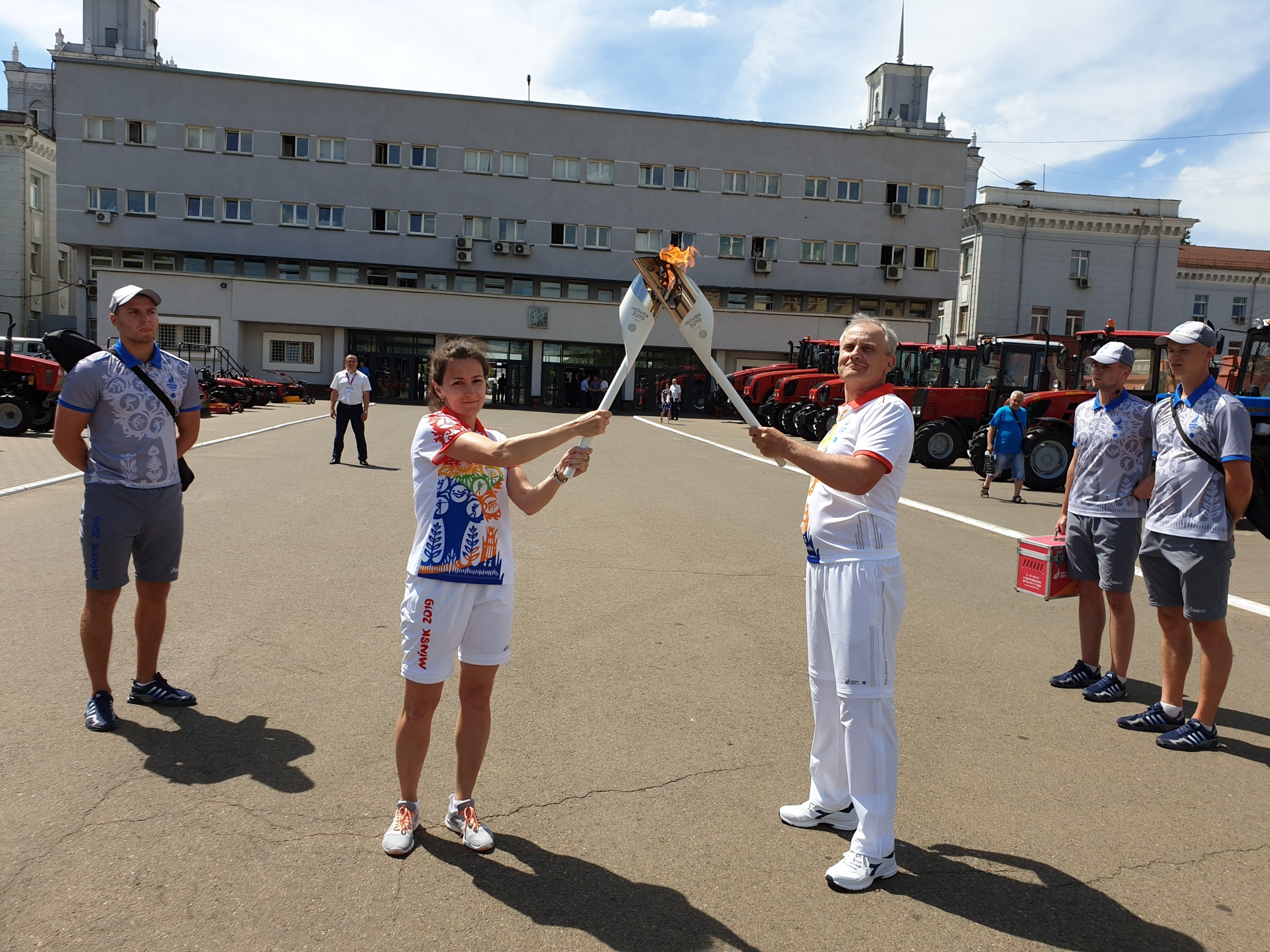 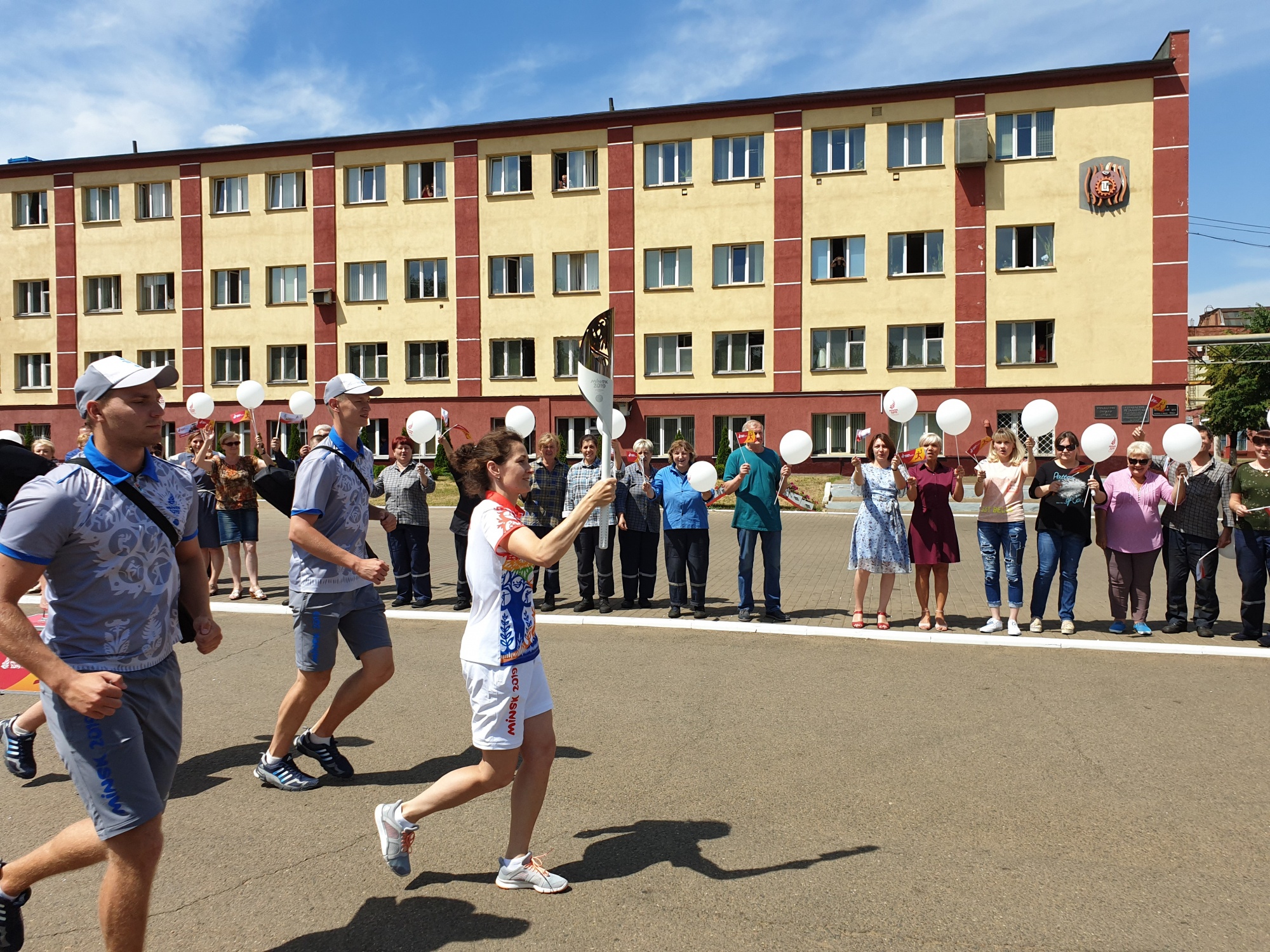 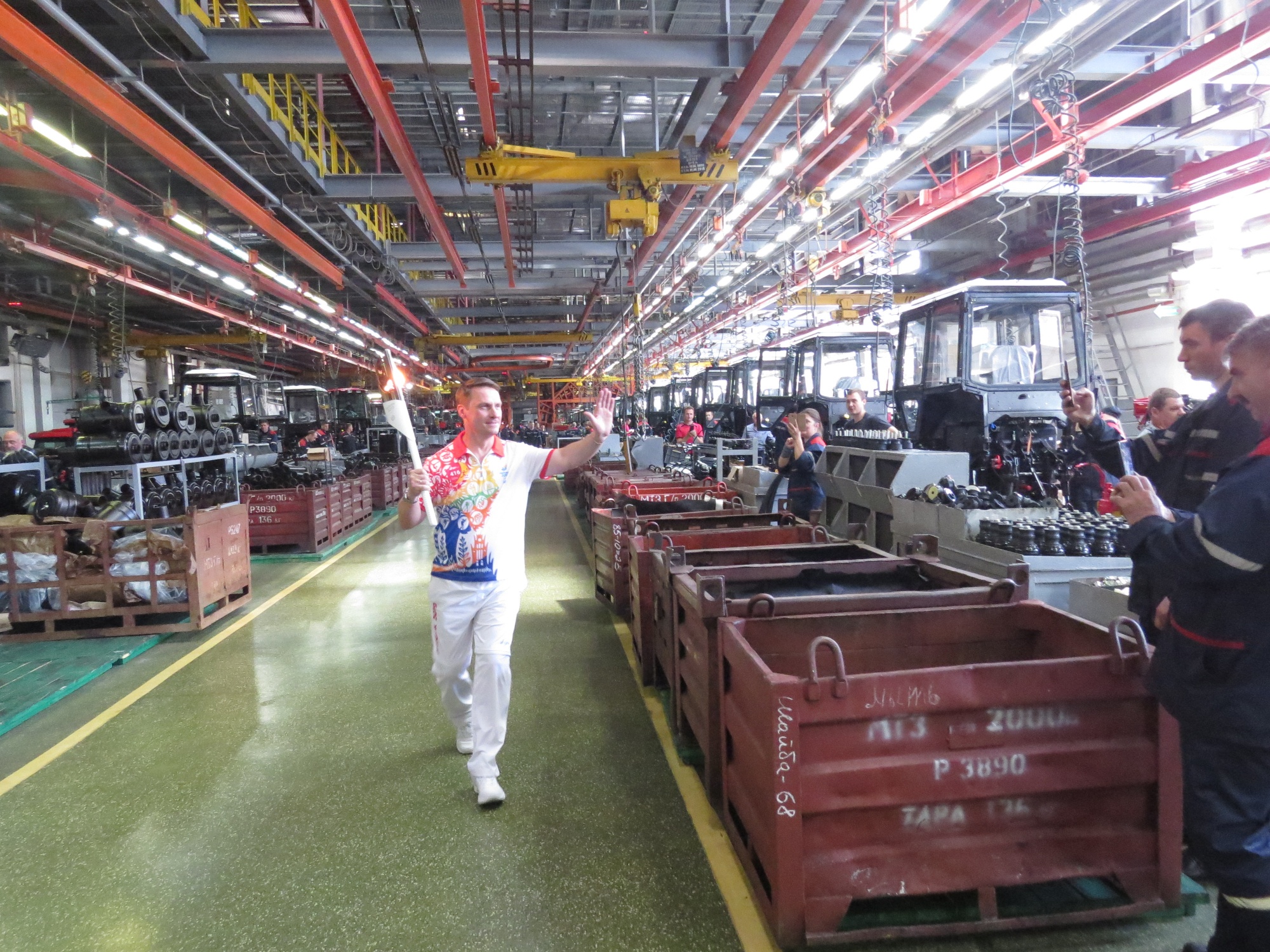 By counting down the time, all those gathered gave a symbolic start to the torch relay at Minsk Tractor Works. Near the first mechanical workshop the torch with a flame was received from Leonid Yushkevich by Daria Pavlenkova, head of the FSC “Tractor” of OJSC “MTW”, master of sports of the Republic of Belarus in judo and sambo, champion of the country in these disciplines. On MTZ-2 tractor, the one from which the history of legendary BELARUS tractors began, she drove along the main street of the enterprise, and she passed the flame of peace to another torchbearer near the tractor assembly building. The one became the electrician of the tractor assembly building Nikolai Kaitan, prize-winner of world and European championships, multiple world champion among kettlebell lifting veterans, international judge, chairman of the Belarusian Weight Lifting Federation. Near the main conveyor the torch relay was greeted by the best athletes of the plant. The flame of peace in the hands of our torchbearer set off on return path already on a tractor from a modern line of machinery. At the site near the museum the vehicle made an honorary circle and the fire of the II European Games was received by Taras Murog, First Deputy General Director of OJSC “MTW”. He congratulated the audience on such a unique event, the witness of which everyone happened to become, and invited Denis Glinsky, General Director of PA “Gorremavtodor of Minsk City Executive Committee”, to the stage. It was decided to donate to the union the tractor model 920.2, on which the torch relay triumphantly completed its march on MTW, more precisely, a certificate for its receipt and keys! Expressing gratitude to the management and labor collective of Minsk Tractor Works for such a gift, Denis Vladimirovich noted that the help of good machinery on the streets of Minsk would be indispensable, and promised that the tanks of this vehicle would never be empty. Right on the stage, the keys to the novelty product were handed over to the driver of “Gorremavtodor”, and to the applause of the audience, the gift left the venue of the ceremony. 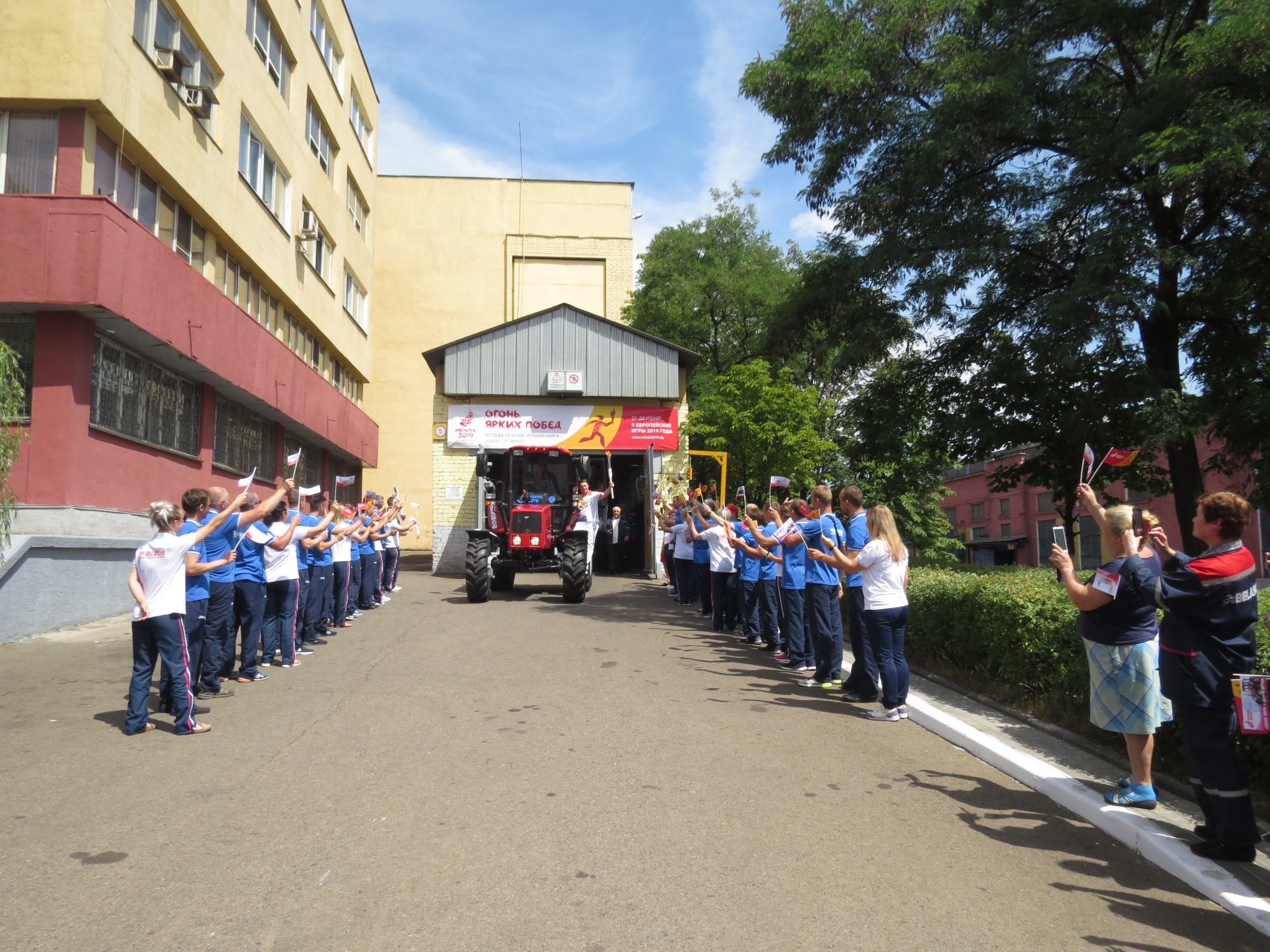 Immediately after Minsk Tractor Works, they waited for the torch relay in the High-Tech Park, and other enterprises of the city. And yesterday, at the Dynamo stadium of the capital, the flame of peace completed its long journey, giving rise to the main sporting event of this year in our country. So, ahead of us is a whole week of exciting sports competitions and new emotions. May they be only good!