The first “Belarus” tractor rolled off the production line in Karachi 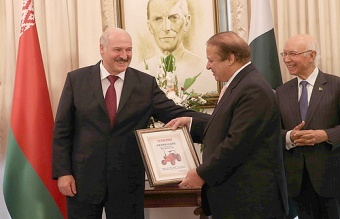 The ceremony took place before the arrival of the Head of our State to the Islamic Republic. The first tractor - it was "Belarus-510" - rolled off the assembly line in a solemn ceremony in Karachi. The President of Belarus Alexander Lukashenko presented the certificate on this tractor as a remembrance to the Prime Minister of Pakistan Nawaz Sharif.

It is a reminder that deliveries of MTW products hold the priority positions among the vectors of the Belarusian-Pakistani cooperation. An annual demand of the tractor market in Pakistan is more than 60 thousand machines. Our company delivers about 3-4 thousand tractors a year to Pakistan. Over the entire period of cooperation which extends from the Soviet period, machines of our mark established a good reputation. Local farmers describing "Belarus" tractors noted that this is an excellent machinery to perform various tasks. Currently, the agricultural sector is a foundation of the economy of the Islamic Republic, forming a fifth part of gross domestic product of the state. Almost half of the population of Pakistan is engaged in it.

At the opening of the Belarusian-Pakistani business forum held within the mentioned visit, the Honorary Consul of the Republic of Belarus in the Islamic Republic of Pakistan, Abdul Rauf, speaking about the huge potential for further development of cooperation between the two states, noted that Belarus has made a name in Pakistan by supplying tractors. Today, an interest of the Pakistani side in MTW machinery is still high. In turn, our enterprise considers Pakistan as a key market outside the territory of the CIS.

It should be noted that Minsk Tractor Works became the first Belarusian enterprise established which established production output in the Islamic Republic. Deputy Marketing Director for Commerce in International Markets Alexander Kazakevitch reported that an assembling of "Belarus" tractors in Karachi was established on the basis of the Trading House of MTW in Pakistan. Along with the opening of the tractor assembling there will be organized a service center and showroom.

Launching of "Belarus" tractors in Pakistani territory corresponds to the plans of MTW relating an increase of market presence in the Islamic Republic of Pakistan. At the first stage it is expected to assemble up to three thousand tractors a year in Karachi. At the same time a delivery of MTW finished machinery will continue. It is planned to export Belarusian tractors produced in Pakistan also to neighboring countries.