Republic of South Africa is interested in deliveries of tractors 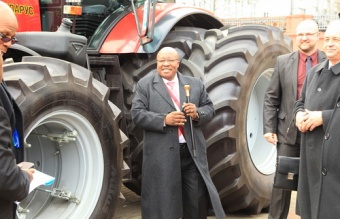 As reported the head of Department of promotion and sales of products to foreign countries of Marketing-center Alexander Kazakevitch, our enterprise cooperates with one of the companies operating in the territory of the said South African province, and acting as a dealer of MTW. Interaction of parties is making good headway and today is among of prospective directions of trade and economic cooperation not only at the level of our plant and its partner in KwaZulu-Natal, but on two states scale. Therefore, the program of official visit of representatives of South Africa in Belarus included negotiations at Minsk Tractor Works.

Traditionally, the meeting of distinguished guests at our enterprise began with demonstration of output products at the exhibition in front of the central entrance. A wide range of "Belarus" tractors and their specifications made a decent impression. Further there was discussion about the ways to develop further cooperation.

Mtimkhulu III expressed interest in supply of finished products, as well as in organization of assembly plant of Belarusian tractors in the territory of KwaZulu-Natal for the needs of local associations of farms. Alexander Kazakevitch noted that cooperation in these directions meets the interests of MTW, considering the said province as a base area to enter the market of Republic of South Africa and extension its sphere of influence in the markets of neighboring countries.

Recall that MTW has been working with the partner of our enterprise in KwaZulu-Natal for the resumption of deliveries of "Belarus" tractors in the Republic of South Africa for the past four years. During this time there was delivered about 40 units of machines in a wide power range - from 60 to 200 horsepower. Held on Monday visit of the delegation of the Republic of South Africa and agreements reached on the MTW will serve as activation of bilateral cooperation.