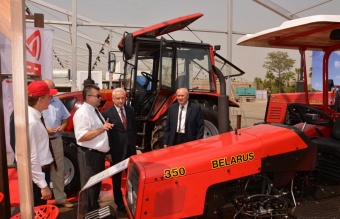 September 7, 2015, the Opening of the 28th International Agricultural Exhibition for Africa and the Middle East "SAHARA - 2015" was held in Cairo.

Ambassador Extraordinary and Plenipotentiary of the Republic of Belarus in Egypt, Sergei Rachkov, attended the Opening of the Belarusian exposition, where has featured the products of the Minsk Tractor Works, OJSC Gomselmash and other Belarusian producers including “Belarus 350” tractor specially designed for Egypt and other countries of the region which has been showcased for the first time.

During the exhibition, a conference was held with the dealers, and also announced the Opening of a new Trading House of MTW «BELMACHINERY FOR INDUSTRY AND TRADE» in Egypt.

At the Exhibition Minsk Tractor Works was represented by the First Deputy General Director of "MTW" Makarenko V.A.

The exhibition will continue until 10th of September, we invite everyone to visit our stands No.6 and No.10.
We will be glad to see you.