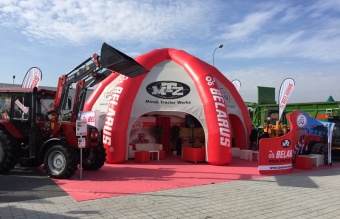 The largest international agricultural exhibition «AGROTECH KIELCE» took place in Poland in Kielce from 27 to 29 March, 2015.

About 700 companies including such major tractor manufacturers like John Deer, New Holland, Farmtrac, Zetor participated in the exhibition. There were foreign companies from Germany, Italy, France, the Netherlands, Austria, Finland, Great Britain, Ukraine and Russia.

The exhibition was placed on an area of 60 thousand square meters. It was visited by more than 60,000 visitors from around the world.

Products of OJSC “MTW” were in great demand and interest among dealers and consumers at the exhibition in Poland. The company's stand was visited by many distinguished guests: it was attended by representatives of the Embassy of the Republic of Belarus, representatives of the bank “Raiffeisen, BNP PARIBAS, BGŻ”, and the exhibition was attended by the Polish Minister of Agriculture and Rural Development - Marek Sawicki. In addition, the stand of "MTW BELARUS TRACTOR" was visited by the majority of Polish companies, some of which will shortly start cooperation with “MTW BELARUS TRACTOR” and become its dealer.

According to the preliminary results of the exhibition, agreements for 300 tractors were signed with potential buyers.